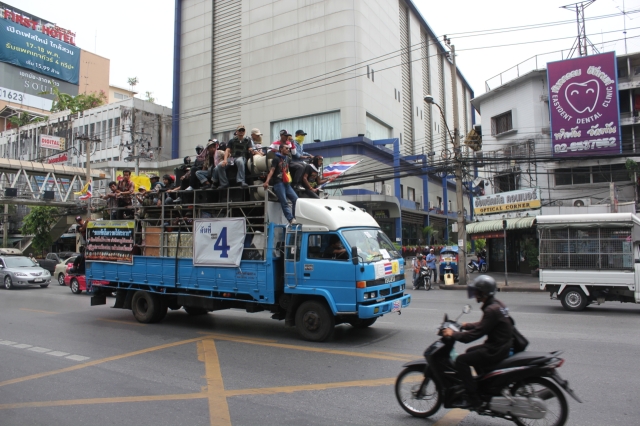 A truck full of protesters barrels through a major street in downtown Bangkok a few days before the military coup in Thailand.

The leaders of the military coup under way in Thailand shortened a nationwide curfew, doled out payments to rice farms, and cracked down more strictly on freedom of speech today. The leadership seems to be trying to soften their image while simultaneously tightening their grip on the country.

On Tuesday, coup leaders began transferring payments to rice farmers that the government had failed to pay earlier this year as part of a national rice-buying system. That same day, the military arrested the Minister of Education for speaking out against the coup.

Today, the curfew — which previously restricted anyone from being out in public between 10:00 pm and 5:00 am — was shortened to 12:00-4:00 am. Facebook was temporarily blocked for Thai users, and the military summoned two reporters for asking tough questions of the leading army general.

Strolling the streets near my hotel in Bangkok, you might not even notice political strife; no military personnel line the streets in this area of town, workers and shoppers go about their business normally, just as coup leaders encourage them to do. But the signs are still here (literally): a giant poster in Thai warns that defaming the king on social media could land you in prison. From my hotel room I tried to access an online story about Thais who dislike the royal family, and what I received was a blank page with the text, “This URL has been blocked by a Court order or it could have an effect on or be against the security of the Kingdom, public order or good morals.” As peaceful as life here seems on the surface, there is no mistake that freedoms in Thailand are still heavily curtailed.

The question of how to describe the coup is becoming ever more confusing.  One local paper called the coup leader, General Prayuth, a benevolent dictator, and “the perfect man for the role,” suggesting this is just what the country needs. At the same time, the Financial Times editorialized that that Prayuth has “imposed a brutal dictatorship that has snuffed out freedom of expression and civil liberties.” Teasing out the truth is complicated, but a danger lies in the growing divide and polarization that the coup may cause.

“For most Thais there is no middle ground; protesters have no time for a truth that lies between black or white, or in this case Red or Yellow,” according to Nick Nostitz, a German photojournalist who has followed the conflict closely for decades. Military control may either foment greater outrage or silence dissent; the outcome is unfolding before us.

Katherine lived on four different continents before settling in to Washington, D.C., to raise her family. She works at a global think tank during the day and raises twin boys the rest of the time. When she isn't working on a spreadsheet for work, she loves walking in the forest with her family, which invariably involves stomping in puddles and climbing on logs. Though she is less of a world traveler these days, she continues to seek out adventures, from exploring D.C.'s museums and playgrounds to taking road trips to national parks. When it's time to unwind, she can be found snuggling with her husband on the couch. Likes: adventures, sleeping past 7 a.m., being surrounded by forests, the sound of her boys laughing, and locally made ice cream. Dislikes: whining, the patriarchy, and people who judge parents/kids.
View all posts by Katherine →
This entry was posted in Politics, Uncategorized and tagged coup, Thailand. Bookmark the permalink.