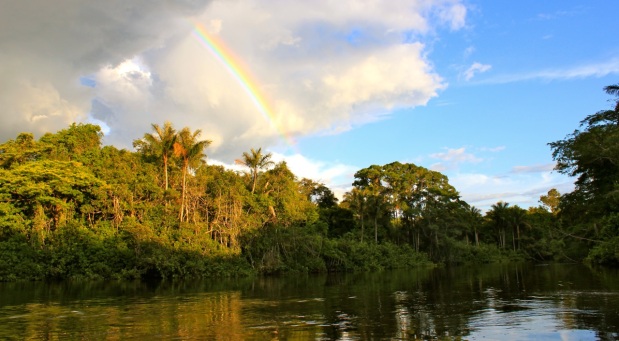 In May, I had the opportunity to explore the importance of forests. No, I didn’t go on a hiking trip. I spent some time at, and wrote about, the Center for International Forestry Research (CIFOR)’s Forests Asia Summit, a conference that brought together international experts from around Southeast Asia, where deforestation is a persistent problem.

I love forests. I love hiking in them and I love living near them (two things that are very difficult to do from Jakarta), but I don’t always think about the amazing role forests play for humans and the planet. We’re often told that forests are the planet’s built-in cooling system (an admittedly important role as we face climate change), but that is only part of it. Forests are key for our food systems and our economy. Forests are a pantry for the world’s poor, and an incubator for biodiversity and unknown genetic material that could lead to vital scientific discoveries. Even those of us who think we live in urban environments may be more dependent on forests than we realize.

Forests and agriculture have an important symbiotic relationship. For example, at one panel discussion, I learned that in Asia, about 80 percent of food crop plants are pollinated by insects that live primarily in forests. Forests also help control the land erosion, water retention and other factors that are key for successful agriculture. In addition, farmers around the world have historically used forests as part of their farming — for example, in India, farmers gather leaf litter to improve the compost they use to fertilize their fields. 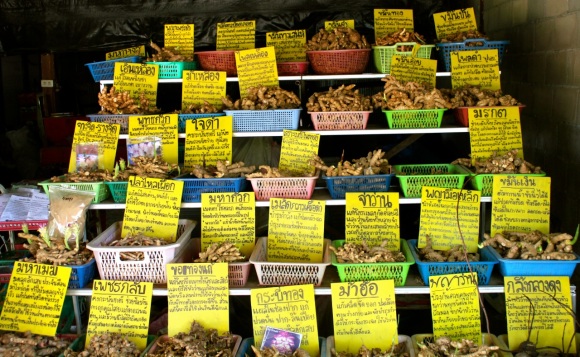 In rural Thailand, roots foraged from nearby forests are sold for food and medicinal use.

Forests are also a key source of food for many people. CIFOR recently released research showing that children who lived in areas with higher tree cover had more nutritious diets, largely because of the diversity of products that families harvested from the forest such as tree fruits, small animals or insects. Think about the origin of those mushrooms in your ravioli, or the bamboo shoots in your Chinese takeout. Those are forest foods, and for some people, the nutrients they provide are essential for survival.

Food products are not the only valuable commodities coming out of forests. While 14 million people are employed in the forestry sector, many more depend on forests for their livelihoods. This includes not only timber extraction, but also valuable, non-timber forest products, such as bamboo. Sure, when you think of bamboo, you may think of shantytowns — as bamboo is an inexpensive construction material. But the product actually has “enormous potential” for mitigating and adapting to climate change, according to Rajendra Pachauri, the chairman of the Intergovernmental Panel on Climate Change (IPCC). Bamboo, which grows back much more quickly than hardwoods and can be harvested without degrading a forest ecosystem, can be used to replace materials such as plastics and metals that rely on primary resource extraction. Next time you think of beautiful wood flooring, think of bamboo.

Most amazingly, I learned that much of the value of forests for our planet and ourselves remains largely unknown and undocumented. Trees have evolved into some of the most genetically variable organisms on Earth, with implications for the provision of unique genetic material for scientific research. Research can lead the development of new varieties of tree fruits that are more nutritious, resistant to pests and commercially valuable, or to discoveries in medicinal properties of trees, among others. The Food and Agriculture Organization (FAO) of the UN is doing important work to document these genetic resources, and released a report about it in May.

These are only a few of the highlights that left me so inspired about forests, and so devastated to learn that in Southeast Asia alone, an area three times the size of Jakarta is stripped of its trees every month (and trust me, Jakarta is huge). If you want more information about these topics or the Forests Asia Summit itself, then Forests News is the place to go.

Katherine lived on four different continents before settling in to Washington, D.C., to raise her family. She works at a global think tank during the day and raises twin boys the rest of the time. When she isn't working on a spreadsheet for work, she loves walking in the forest with her family, which invariably involves stomping in puddles and climbing on logs. Though she is less of a world traveler these days, she continues to seek out adventures, from exploring D.C.'s museums and playgrounds to taking road trips to national parks. When it's time to unwind, she can be found snuggling with her husband on the couch. Likes: adventures, sleeping past 7 a.m., being surrounded by forests, the sound of her boys laughing, and locally made ice cream. Dislikes: whining, the patriarchy, and people who judge parents/kids.
View all posts by Katherine →
This entry was posted in Indonesia, Nature, the environment & landscapes and tagged Asia, Center for International Forestry Research, CIFOR, Food systems, Forests, Forests Asia Summit, importance of forests, Jakarta, palm oil, Southeast Asia, timber. Bookmark the permalink.