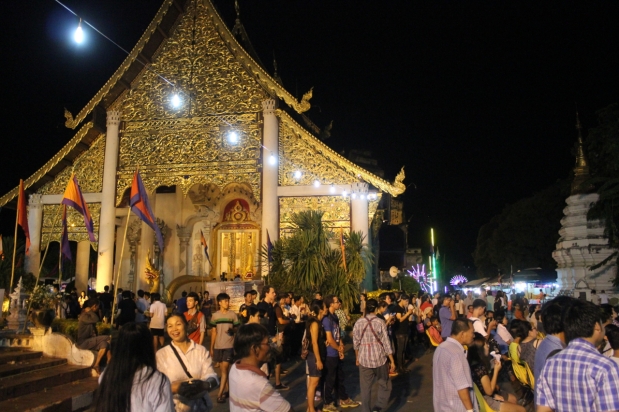 Revelers at the Wat Chedi Luang in Chiang Mai, Thailand, on 25 May, 9:50 pm, 10 minutes before the military curfew took effect.

In Chiang Mai, Thailand, locals butted up against the military-imposed curfew, partying until after 10pm as part of an annual city festival.

The Inthakin festival is held in mid-May, to ask the spiritual guardian of the city to bring monsoon rains on time, normally rages late into the night. On Sunday, May 25, about 5 minutes before the 10:00 pm curfew imposed nationwide by the military coup, the party suddenly ceased.

The ferris wheel stopped spinning, the music stopped playing and the streets slowly began to clear out. Even after 10:00, though, revelers continued to munch on street food; 7-11 continued to sell icy beverages to the throngs of shoppers filing through its doors; at the temple grounds, the pious continued to toss flowers around a golden statue of Buddha.

The Inthakin festival centers around Wat Chedi Luang, the temple grounds that also house the city pillar, which locals believe was given to the city by a god over 1,000 years ago. During the full first day of the eight-day festival, residents of the city come to pay homage at Chedi Luang by giving donations and decorating the key symbols of the temple with flowers that they line up to buy at the temple gates. The annual celebration normally engulfs the adjacent city blocks, with food vendors lining the streets and a carnival exploding in a lot near the temple. Several city blocks overflow with people, and erupt with pulsating music, colorful lights, and the complex smells of smoky street food, late into the night.

This year, the festival began 3 days into a military coup that is tightening its grip to silence protests. Earlier that same day the military replaced the Chiang Mai Police chief, and also broke up small anti-coup protests in another area of the city. Soldiers in army fatigues carrying machine guns patrolled the streets of the city, but seemed to avoid the area where the Inthakin festival was underway.

Revelers continued after the end of the curfew, but the military did not intervene.

Katherine lived on four different continents before settling in to Washington, D.C., to raise her family. She works at a global think tank during the day and raises twin boys the rest of the time. When she isn't working on a spreadsheet for work, she loves walking in the forest with her family, which invariably involves stomping in puddles and climbing on logs. Though she is less of a world traveler these days, she continues to seek out adventures, from exploring D.C.'s museums and playgrounds to taking road trips to national parks. When it's time to unwind, she can be found snuggling with her husband on the couch. Likes: adventures, sleeping past 7 a.m., being surrounded by forests, the sound of her boys laughing, and locally made ice cream. Dislikes: whining, the patriarchy, and people who judge parents/kids.
View all posts by Katherine →
This entry was posted in Uncategorized. Bookmark the permalink.