Fed up with thuggery in the name of Islam, Indonesians push back

This year, during Ramadan — for perhaps the first time — Indonesians are standing up to a group known to terrorize the country during the holy month. 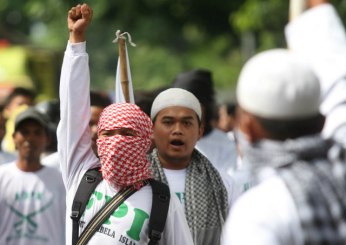 Members of the Front Pembela Islam (FPI) call themselves “defenders of Islam.” Most scholars, and Indonesians I’ve met, call them thugs. The FPI enforce the more restrictive laws of Islam by raiding bars, clubs, liquor stores, etc., usually damaging property and hurting people who get in their way. Last year they managed to thwart a sold-out concert in Jakarta by Lady Gaga on the grounds that the show would corrupt youths.

Most FPI attacks are actually part of a racket, as Fealy and White explain in “Expressing Islam: Religious Life and Politics in Indonesia.” The FPI target businesses, whether legal (bars, clubs) or illegal (brothels, gambling houses) that violate FPI’s own (fuzzy) interpretation of Islamic sharia law. This interpretation is neither consistent nor universally applied. Typically, FPI files an official complaint against an establishment, giving police time to inform the owner of the establishment. The owner can then pay off the FPI to avoid a raid, or pay the police to provide security for the establishment. According to Fealy and White, the police have cooperated with the FPI since the group’s beginnings, contributing to many Indonesians’ feelings of powerlessness against this mafia-type organization.

But this year, as the FPI carried out early-Ramadan raids, a grass-roots resistance seems to be growing.

The FPI started out Ramadan on the wrong foot with the Indonesian public. On a morning TV talk show in June, during a discussion about Ramadan raids, an FPI representative threw a glass of water in a university professor’s face. Losing one’s temper — especially in such a public setting — is a social faux pas in Indonesia. Several Indonesian Islamic leaders condemned his actions, arguing that the FPI is not representative of Islam and sets a bad example for the country’s Muslims.

Recently, a mob (reported at more than 1,000 people) attacked an FPI group carrying out raids in Kendal, Central Java. As FPI members fled the scene, they accidentally killed a woman by knocking her off a motorcycle, sparking public outrage. In response, police have arrested three FPI members. Actual police action against the FPI is rare, and so these arrests signal the severity of the public’s anger. Meanwhile, an anti-FPI online community is growing, and a petition for the government to disband the FPI now has more than 41,000 signers.

The current public response reflects a growing intolerance for the FPI. Last year, when FPI leaders flew to Central Kalimantan on the island of Borneo to inaugurate a new branch of the organization, hundreds of protesters were waiting at the airport and prevented them from deplaning. The flight was forced to leave the airport with the FPI leaders still on board. Later the local government of Central Kalimantan officially rejected the FPI, forbidding them to establish a local chapter.

The public outcry against the FPI has an interesting civil-liberties twist. Writers and activists have suggested using a newly approved law, not yet in force, that gives the government the power to disband any organization that repeatedly causes social unrest. There is palpable public support for this tactic, based on social media and my own conversations with locals. But as a Jakarta Post commentator argues, the application of this law could be a slippery slope toward restricting civil liberties, specifically the right to organize and the right to freedom of expression. The Indonesian government has not had such a power since the time of Suharto, whose brutal 32-year dictatorship fell apart in the late 1990s.

Katherine lived on four different continents before settling in to Washington, D.C., to raise her family. She works at a global think tank during the day and raises twin boys the rest of the time. When she isn't working on a spreadsheet for work, she loves walking in the forest with her family, which invariably involves stomping in puddles and climbing on logs. Though she is less of a world traveler these days, she continues to seek out adventures, from exploring D.C.'s museums and playgrounds to taking road trips to national parks. When it's time to unwind, she can be found snuggling with her husband on the couch. Likes: adventures, sleeping past 7 a.m., being surrounded by forests, the sound of her boys laughing, and locally made ice cream. Dislikes: whining, the patriarchy, and people who judge parents/kids.
View all posts by Katherine →
This entry was posted in Bureaucracy, Culture, Indonesia, Politics, Religion and tagged extremist, FPI, indonesia, Islam, islamic sharia law, raids. Bookmark the permalink.

1 Response to Fed up with thuggery in the name of Islam, Indonesians push back