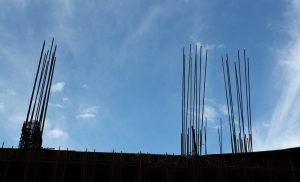 Quito is reaching for the sky.

From our apartment window we get to watch the impact of three trends that define Ecuador today — population growth, urbanization, and a growing middle class.

The result is a real-estate boom. If you walk around our neighborhood, say within a five-block radius of our apartment, you will find as many as 12 new high rises under construction.

Over the year we have watch the lot behind our building turn from a house with trees in the yard into a highrise.

Ecuador’s population growth rate (at about 1.38 currently) is actually falling, but this is still higher than many Latin American countries, and certainly higher than North America and Europe.  Recent economic stability, brought on in part by dollarization in 2000, has led to a growing middle class. Poverty is generally falling, and as people look for higher wages they move to the cities — since 1990, more than half of Ecuadorians live in cities. As the capital, Quito draws many of these migrants. Now, most of these effects are felt on the edges of Quito, south and north, and on the massive developments that have exploded in the adjacent valley where the wealthy escape to cleaner air and gated communities. However, our neighborhood seems to be yet another growth center.

Interestingly, it seems that investors are often buying up new apartments to rent, and rents can be surprisingly high. In fact, the Ecuadorian government recently passed a law that rent in a year cannot reach more than the full assessed value of an apartment. Of course, with current demand, apartments often sell for much more than their assessed value. So buying seems like a risky investment.

Of course, watching all that construction can make one uneasy about living on the 11th floor of an apartment building. Operations are less mechanized than in the U.S., and bamboo poles provide makeshift scaffolding for workers who wear no harnesses and who heave concrete blocks up one story at a time. 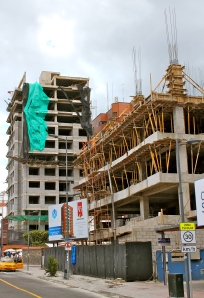 Some construction sites are less than a block apart.

Recently, when construction behind our building caused flooding in our garage that knocked out the elevator, I realized just how little planning might actually go into building here.

Katherine lived on four different continents before settling in to Washington, D.C., to raise her family. She works at a global think tank during the day and raises twin boys the rest of the time. When she isn't working on a spreadsheet for work, she loves walking in the forest with her family, which invariably involves stomping in puddles and climbing on logs. Though she is less of a world traveler these days, she continues to seek out adventures, from exploring D.C.'s museums and playgrounds to taking road trips to national parks. When it's time to unwind, she can be found snuggling with her husband on the couch. Likes: adventures, sleeping past 7 a.m., being surrounded by forests, the sound of her boys laughing, and locally made ice cream. Dislikes: whining, the patriarchy, and people who judge parents/kids.
View all posts by Katherine →
This entry was posted in Ecuador, Our Daily Life. Bookmark the permalink.