The long road to a new airport

As I first sat down to write this, I heard the roar of a jumbo jet flying about 400 feet over the roof of our high-rise apartment building. It was (as usual) loud enough to set off a few car alarms on the street below as the plane descended toward Quito’s Mariscal Sucre International Airport.

That sound – for more than 50 years, a constant backdrop of noise for millions of Quiteños – has just disappeared, for good. On Wednesday, Quito opened a new airport outside of the city, and on Thursday, I was on one of its first planes (not by choice; I had to fly to Bogotá for work). 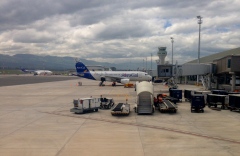 The airport has more space for cargo planes, but only six passenger gates.

At a cost of US$ 700 million, the new airport — from a passenger’s perspective — is no better than the old one. For one, the new airport is more than an hour away from our apartment in north-central Quito (compared with the 10-minute trip it took for us to get to the old one). Now, this means at least a $25 taxi ride.

The new airport has only six gates and limited waiting areas, seats and food vendors. When I arrived there were huge lines – after all that construction, the airport still had not planned enough space for its passengers to line up for check-in.  But passengers are not the real reason for a new airport.

Flowers – especially roses – are the reason for a new airport.  Ecuador is one of the world’s largest rose exporters, and roses fly first class. Well, they actually fly in cargo planes, but they always fly, so the demand for space for giant refrigerated warehouses, packing areas and jumbo cargo planes was a major impetus for the airport.  The new airport does have a taller control tower, more parking space and the second longest runway in South America.

Long lines have not been improved by a new airport.

The flower exporters may have been the final inspiration in a more than 50-year struggle to build a new airport. After the national government initiated plans for a new airport in the 1960s, a series of obstacles stalled the process. In 2000, the government finally transferred responsibility of airport management to the municipality, and for the first time, the process of choosing a site could be completed. Eventually a construction contract was signed with a Canadian company, and construction began.  Problems with the contract brought construction to a halt in 2009 when the project was about 70% complete, and left the building in disuse for years, eventually the problems were resolved. But Ecuador was still responsible for building the roads for people to access the new airport, and when the Canadians handed over the completed airport a year ago, the roads were nowhere near complete. Today, there is a somewhat decent road, and the government promises to complete the highway portion by 2014.  But the airport is operational. Welcome to Ecuador.

Katherine lived on four different continents before settling in to Washington, D.C., to raise her family. She works at a global think tank during the day and raises twin boys the rest of the time. When she isn't working on a spreadsheet for work, she loves walking in the forest with her family, which invariably involves stomping in puddles and climbing on logs. Though she is less of a world traveler these days, she continues to seek out adventures, from exploring D.C.'s museums and playgrounds to taking road trips to national parks. When it's time to unwind, she can be found snuggling with her husband on the couch. Likes: adventures, sleeping past 7 a.m., being surrounded by forests, the sound of her boys laughing, and locally made ice cream. Dislikes: whining, the patriarchy, and people who judge parents/kids.
View all posts by Katherine →
This entry was posted in Ecuador, Our Daily Life. Bookmark the permalink.