In Jakarta, surge in urban husbandry precedes day of sacrifice 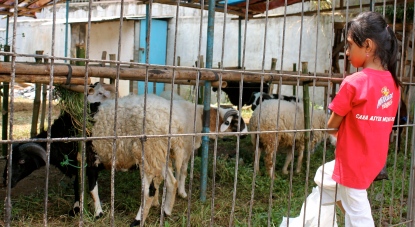 As I’ve mentioned, Jakarta is a city of strange juxtapositions. Our lovely housing complex is surrounded by a wall; on the other side, just behind our house and slightly uphill, is a quarter-acre lot that until last week was vacant, save for some banana trees, a shack and piles of trash. A week ago, we noticed some crude bamboo structures being erected in the lot. Then, about two dozen cattle appeared. A handful of sheep and a dozen goats have since joined them. We began to worry if we were going to have a small farm just uphill from our home.

Is Jakarta taking urban agriculture to its extreme? No. this is all preparation for the Muslim holy day of sacrifice beginning on Eid ul-Adha, next Tuesday. Temporary pens have appeared all around the city, tucked between skyscrapers and malls, filled with animals from central Java.

On the day of sacrifice, Muslims are obliged to slaughter an animal in honor of Allah. The meat is usually divided in thirds for the family, their friends or neighbors, and the poor. Only children, the poor, and people on long journeys are exempt from the mandate to slaughter an animal on this day. For non-Muslims, this point is interesting: The sacrifice is not just a tradition, but a religious obligation.

The ritual can create a heavy burden for those who live on the edge of poverty. Islam is very specific about acceptable animals: A goat or sheep qualifies as one sacrifice (no chickens or ducks); up to seven people can share a cow or camel. In Jakarta, those who can afford it buy whole cows themselves, at prices of more than USD 1,500 per cow (we have not yet seen any camels in town). Mosques take up collections to buy additional animals for the poor.

For many Indonesians, though, buying their own sacrifice is a matter of pride and piety. As my driver explained, “It is OK if you cannot slaughter, but if you can, you will be happy in heaven.” So they will scrimp and save all year to be able to buy one animal, or part of one.

Not far up the road from the makeshift stockyard that abuts our home, I noticed a scrawny black goat baying for food as he rummaged through trash by a small shack.  Several families will most likely share that goat on October 15 in an attempt to gain the reward of the sacrifice. The reward of course is two-fold: pleasing Allah, and meat for supper, a rare treat for many poor Indonesians.

Some 28 million people live in the Jakarta metro area, and the majority (around 87%) of them are Muslim. Though I have not found any estimate for Jakarta, about 100 million animals are sacrificed for Eid ul-Adha worldwide. We can guess that a few million of those are in Jakarta alone. This poses a problem: Where are millions of animals to be slaughtered in a major metropolis? The answer: outside of mosques, at homes, in yards and in driveways.

I will be sure to post accounts of preparations and the actual holiday over the coming week. Until then: Have you ever been part of the Eid-ul-Adha celebration? What was your experience?

Katherine lived on four different continents before settling in to Washington, D.C., to raise her family. She works at a global think tank during the day and raises twin boys the rest of the time. When she isn't working on a spreadsheet for work, she loves walking in the forest with her family, which invariably involves stomping in puddles and climbing on logs. Though she is less of a world traveler these days, she continues to seek out adventures, from exploring D.C.'s museums and playgrounds to taking road trips to national parks. When it's time to unwind, she can be found snuggling with her husband on the couch. Likes: adventures, sleeping past 7 a.m., being surrounded by forests, the sound of her boys laughing, and locally made ice cream. Dislikes: whining, the patriarchy, and people who judge parents/kids.
View all posts by Katherine →
This entry was posted in Culture, Food & Drink, Indonesia, Religion and tagged animals, eid ul adha, Islam, Jakarta, Sacrifice. Bookmark the permalink.

3 Responses to In Jakarta, surge in urban husbandry precedes day of sacrifice