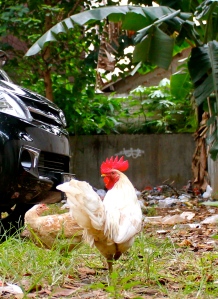 I noticed this guy in a residential neighborhood in Jakarta about two blocks from a huge mall.

Our week of language classes in Yogyakarta yielded quite a few interesting lessons. During our long days in class, we got to discuss differences with people who were quite open to explaining their culture. One very telling difference was the symbol for waking up — “bangun” in the local language.

While we were learning about time, the teacher asked us in Indonesian what time we wake up, and to illustrate, she used a picture of a rooster. Then she asked how one illustrates waking up in the U.S. My instant reaction: an alarm clock blaring. Isn’t that what every TV commercial for cold medicine or mattresses uses? (“Buy our product and the alarm clock will not terrorize you.”) I felt a little guilty realizing typical American culture could be so removed from nature, that blinking digital numbers signaled morning.

In Indonesia, the rooster is the alarm clock. Even if you live in a high-rise apartment building in Jakarta, you probably have a rooster next door. Unlike the U.S., the urban does not seem to wipe out the rural. It’s part of the mishmash of this densely populated country: Nature seems to play a role in everyday life, whether in a megacity like Jakarta, or a ‘town’ of 50,000 people on a remote island. Trees creep out into what little sidewalk there is. Lizards laze around swimming pools in fancy apartment complexes. Bugs are everywhere, and chickens often chase them out into the open street. A city block may consist of several houses, a furniture store, a gas station and a seemingly vacant lot where someone grows bananas and sleeps under a tin-roofed shanty. Somewhere on that block there is a rooster to wake you at dawn.

Katherine lived on four different continents before settling in to Washington, D.C., to raise her family. She works at a global think tank during the day and raises twin boys the rest of the time. When she isn't working on a spreadsheet for work, she loves walking in the forest with her family, which invariably involves stomping in puddles and climbing on logs. Though she is less of a world traveler these days, she continues to seek out adventures, from exploring D.C.'s museums and playgrounds to taking road trips to national parks. When it's time to unwind, she can be found snuggling with her husband on the couch. Likes: adventures, sleeping past 7 a.m., being surrounded by forests, the sound of her boys laughing, and locally made ice cream. Dislikes: whining, the patriarchy, and people who judge parents/kids.
View all posts by Katherine →
This entry was posted in Culture, Indonesia, Our Daily Life. Bookmark the permalink.

3 Responses to The Natural Alarm Clock