Some of you may know of Bruno’s personal shame: Despite his Dutch origins, he had never been to the Netherlands (though he had passed through the airport more than once). Until today…

During our 8-hour layover between Panama and Singapore, we hopped on the train into Amsterdam and wandered around for a while.Bruno’s impression? “Exactly how I pictured it.” It’s true that the cute houses lining canals and sidewalks full of bicycles look like a real-life postcard. 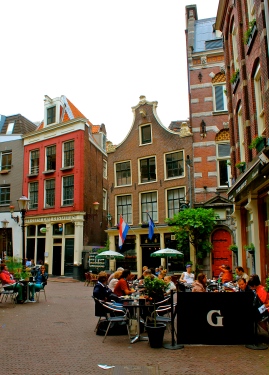 Classic Dutch architecture can be found on every corner, and admired from a plethora of street cafes.

Of course, the city is well-known for its openness to drug use and the sex trade. Interestingly, we had both read previously that Amsterdam had changed the law to limit sales of marijuana to Dutch citizens only, among other drug restriction.  Though we did not actually try to buy any pot, we ducked into a few places, out of curiosity. It seemed that any of the staff would have been happy to sell us a joint. After a little research we learned that the ban on selling pot to tourists was dropped in late 2012, for Amsterdam specifically. The mayor had expressed concerns about the impact of such a change, stating it could lead to disputes, black markets and would remove the government’s ability to control quality and sales.  Instead, Amsterdam itself only enforces several new regulations restricting drugs near school.  No wonder the coffee shop culture appears to be thriving.

Katherine lived on four different continents before settling in to Washington, D.C., to raise her family. She works at a global think tank during the day and raises twin boys the rest of the time. When she isn't working on a spreadsheet for work, she loves walking in the forest with her family, which invariably involves stomping in puddles and climbing on logs. Though she is less of a world traveler these days, she continues to seek out adventures, from exploring D.C.'s museums and playgrounds to taking road trips to national parks. When it's time to unwind, she can be found snuggling with her husband on the couch. Likes: adventures, sleeping past 7 a.m., being surrounded by forests, the sound of her boys laughing, and locally made ice cream. Dislikes: whining, the patriarchy, and people who judge parents/kids.
View all posts by Katherine →
This entry was posted in Transition. Bookmark the permalink.