1.     You try to kiss people on the cheek when you meet or greet them, causing an awkward moment.

This seemed like normal traffic, until I returned to the US last week.

3.     Americans look fat to you, as though they are all just a little bit swollen.

4.     Cars seem to get so much space for parking and driving, like several feet on every side. (Also, Red lights/stop signs are NOT optional. And, roads are dotted with clean, well appointed gas stations.)

5.     You are a little offended that you are not greeted upon entering shops, offices, elevators or any other public space (you are also both disappointed and relieved that store clerks don’t follow you around while you shop).

6.     You wander around drugstores and supermarkets just to ogle at the massive selection. 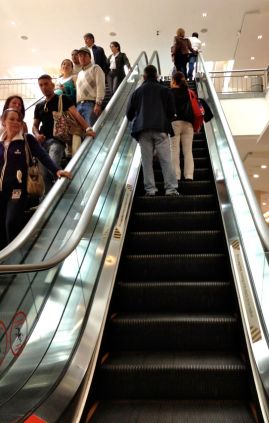 Ecuadorians taught me to just stand still on escalators.

7.    You get on escalators and stand still. People start walking around you (and they are not grasping the railings for dear life.)

8.     In every bathroom, you look for a bin to throw the toilet paper in, so that it won’t wreak havoc on the shoddy plumbing (throwing toilet paper into the toilet is surprisingly hard to re-learn). 8b. You keep trying to flush toilets and turn on sinks, but they do it on their own.

9.   You show up to appointments on time with something to read while you wait — and are repeatedly surprised that you in fact don’t have to wait.

10.   You keep looking for the bottle of drinkable water in people’s homes, because you wouldn’t think to drink from the tap.

12. You notice that you don’t hear regeton, latin hiphop and bachata everywhere you go (or in your own apartment building)

Katherine lived on four different continents before settling in to Washington, D.C., to raise her family. She works at a global think tank during the day and raises twin boys the rest of the time. When she isn't working on a spreadsheet for work, she loves walking in the forest with her family, which invariably involves stomping in puddles and climbing on logs. Though she is less of a world traveler these days, she continues to seek out adventures, from exploring D.C.'s museums and playgrounds to taking road trips to national parks. When it's time to unwind, she can be found snuggling with her husband on the couch. Likes: adventures, sleeping past 7 a.m., being surrounded by forests, the sound of her boys laughing, and locally made ice cream. Dislikes: whining, the patriarchy, and people who judge parents/kids.
View all posts by Katherine →
This entry was posted in Culture, Transition. Bookmark the permalink.