The closest point to the sun

Chimborazo, a volcano in central Ecuador, happens to be the closest point to the sun on Earth. Because the Earth bulges at its center, the volcano’s proximity to the Equator makes it the farthest point from the center of the Earth, even though it is not the tallest mountain from sea level. Chimborazo is 6,268 meters (20,564 ft) from sea level, 2,580m (8,465 ft) shorter than Mount Everest. Because of the equatorial bulge, however, the peak of Chimborazo is 2.1 kilometers closer to the sun than Everest.

Unfortunately, the sun is no friend to this mountain. Chimborazo is still covered in glaciers, but they are melting fast due to global warming. One research paper says that between 1986 and 2010, 35% of the glacier had disappeared. The difference is visible: Old photographs that one sees around Ecuador show Chimborazo’s entire peak permanently covered in snow. On our visit this past weekend, the snow seems to cover only the very top.We were very lucky to see Chimborazo on a clear evening. My grandfather looked up at the peak and told us that only a few years ago, the snows reached twice as far down the mountain as what we saw that day. 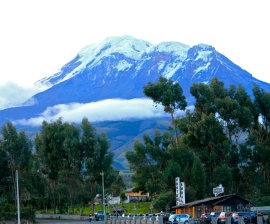 The evening before we visited the park, we could see how little remains of Chimborazo’s snow-cap. My grandfather said the snow used to reach the level of the cloud in the foreground.

We did not hike up to any glaciers, but we visited the lowest hiker’s stop on the volcano, a point at which snow was normally found years ago. There was no snow in sight. We did find, however, that the altitude (4,800 meters) made even a brisk walk taxing.

Wild vicuñas now roam the expansive “páramo,” as Chimborazo has been declared a national park.

The area has been turned into a nature preserve, and some efforts have been made to revive the vicuña population, which was decimated by development. A cousin of the llama, the vicuña is endemic to this area. But the return of vicuñas and other Andean fauna cannot stop the forces that are melting the glaciers. The impending loss of these glaciers — key sources of water — will be devastating for the surrounding towns and cities. These glaciers are on track to vanish within the next 30 years.

Katherine lived on four different continents before settling in to Washington, D.C., to raise her family. She works at a global think tank during the day and raises twin boys the rest of the time. When she isn't working on a spreadsheet for work, she loves walking in the forest with her family, which invariably involves stomping in puddles and climbing on logs. Though she is less of a world traveler these days, she continues to seek out adventures, from exploring D.C.'s museums and playgrounds to taking road trips to national parks. When it's time to unwind, she can be found snuggling with her husband on the couch. Likes: adventures, sleeping past 7 a.m., being surrounded by forests, the sound of her boys laughing, and locally made ice cream. Dislikes: whining, the patriarchy, and people who judge parents/kids.
View all posts by Katherine →
This entry was posted in Ecuador, Nature, the environment & landscapes. Bookmark the permalink.