For Want of Blueberry Muffins

There are a few things I really miss from the U.S. (besides family and friends). I have managed to ‘import’ enough maple syrup in my suitcase and those of visitors to last me until Christmas. Blueberries, however, are harder to pack. 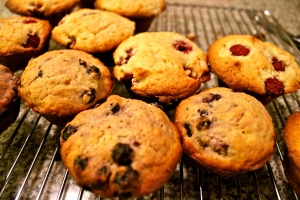 You might ask, ‘Really, no blueberries in Ecuador?’ Ecuador grows something called mortiños but they are different from American blueberries and taste more like bitter currants. It turns out that blueberries are originally from North America and are not consumed in much of the rest of the world. Although Chile exports blueberries, they are sold to the U.S. and Europe; none are imported to Ecuador. (When I emailed a Chilean export company, they said they would be happy to ship them to me, with a minimum quantity of 500 kilos or more – that’s more than 1,100 lbs.)

So, in my desperation for American blueberries, I have decided to try shipping them from the U.S. in each of their shippable forms. First, I ordered a giant canister of freeze-dried blueberries. The next shipments to arrive will contain dried and then canned (packed in water) blueberries. Each of these will be put to the test: How do they taste in baked goods – at altitude?

Baking at altitude presents its own challenges, especially since our oven does not have very accurate temperature controls.

Today I made lemon-blueberry muffins. However, for fear that the freeze-dried blueberries would be a failure, I made half of them with raspberries, which I can sometimes find fresh here. The result: Meh. The muffins were delicious when made with raspberries, but freeze-dried blueberries (having been rehydrated and added to the batter) just come out kind of tough and not very flavorful. Fortunately, Bruno is not picky; the muffins will surely not be a waste. I have higher hopes for the canned berries.

Other things I miss enough to write entire blog posts about include: cheddar cheese and fresh picked New England apples.

Katherine lived on four different continents before settling in to Washington, D.C., to raise her family. She works at a global think tank during the day and raises twin boys the rest of the time. When she isn't working on a spreadsheet for work, she loves walking in the forest with her family, which invariably involves stomping in puddles and climbing on logs. Though she is less of a world traveler these days, she continues to seek out adventures, from exploring D.C.'s museums and playgrounds to taking road trips to national parks. When it's time to unwind, she can be found snuggling with her husband on the couch. Likes: adventures, sleeping past 7 a.m., being surrounded by forests, the sound of her boys laughing, and locally made ice cream. Dislikes: whining, the patriarchy, and people who judge parents/kids.
View all posts by Katherine →
This entry was posted in Ecuador, Food & Drink, Our Daily Life and tagged food. Bookmark the permalink.