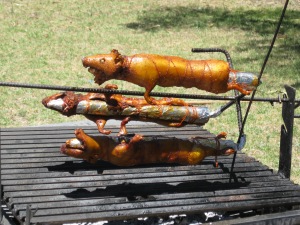 Cuy (guinea pig) is a popular dish in the sierra. It tastes rather like chicken, but there’s not a lot of meat on it. When ordering cuy, prepare to receive the head as well.

Well, I talked about the beer. Now let’s talk about food.

Way up in the Andes, some crops grow better than others. But what grows well up here isn’t always the kind of thing an American craves to eat. The traditional food of the sierra is very bland – mostly potatoes; quinoa (a type of grain – very hearty); choclo, a type of corn; chochos (a kind of bean not unlike Lima beans), and, of course, cuy (pronounced “coo-ey” – it’s guinea pig). Thankfully, the food in Ecuador’s expansive coastal region is a bit more exciting: All sorts of seafood; lots of rice and beans; and plenty of fresh fruits and veggies (think bananas, coconuts, avocadoes, and an endless array of indigenous tropical fruits that are nearly impossible to find in the U.S.). Ecuador also does ceviche very well (ceviche is seafood that is “cooked” in nothing but lime juice – very tasty!), and the specialty on Ecuador’s north-central coast is seafood with peanut sauce. Sounds weird; tastes amazing.

So, Ecuadorean cuisine is as diverse as the country itself – typical fare in coastal Guayaquil is very different from that of Andean Quito, which is different from that you’d find in the eastern jungles. Thankfully, all of these foods and more are available in Quito.

That said, a “typical” serrano meal – i.e., food that is common in the Andean highlands – might start with an humita (like a corn tamale), ceviche de chochos (the aforementioned beans in a tomato, onion and lime sauce – and not to be confused with seafood ceviche) or locro de papas (potato soup with chunks of cheese and a slice of avocado). For the main course, you might have seco de chivo (a popular goat dish), fritada or hornado (roasted pork) or cuy (probably roasted) with some mote (a native species of corn that has HUGE kernels) on the side.

Sadly, this type of meal is out of reach for some Quiteños – meat of any kind, including cuy (which does not have a lot of meat on it to begin with) is a luxury not everyone can afford. Nutrition, as Katherine can tell you, is a serious problem for many poor people in the Andes.

Moreover, with the arrival of American-style fast food in Ecuador, you can get a lot of unhealthy calories for very little money. (KFC, for one, is firmly established in Quito, and as people’s incomes rise, you will see more and more American companies moving in.) Thus, the number of people who are overweight or obese in Ecuador is actually rather high, and diabetes is a growing problem. We have exported our lifestyle here, as we have elsewhere, and now Ecuadoreans are suffering more of the same maladies that Americans are.

All in all, though, we eat well here. Of course, there are things we miss – for Katherine, decent bagels and veggie burgers; for me, gyros and Chicago-style hot dogs (I actually would kill for one) – but those are small things.

The other day we found falafel mix and tahini sauce – imported from Lebanon – at a specialty store. It was expensive, but we bought it without hesitation. That night we made falafel sandwiches with homemade hummus and Greek salad. In Chicago, New York or Philly, you can find good, authentic Mediterranean cuisine without trying very hard. For us in Ecuador, it was a rare and welcome treat.

This entry was posted in Ecuador, Food & Drink. Bookmark the permalink.