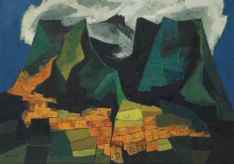 On Saturday, Bruno and I climbed one of the many volcanoes that surround our home.  Living in the shadows of volcanoes is a difficult feeling to describe. We can see seven on a good day from any point in the city, but there are at least 30 close enough flatten us in a full eruption (to be fair, only 21 are active). In other words, we are constantly reminded of their presence.

The Quiteño painter, Guayasamin, captured the sensation well, with dark masses looming over clusters of little square buildings. Guayasamin believed, as do many Ecuadorians, that there is a relationship between the mood of the mountains and the mood of the people who live under them.
On Monday, one of our neighbor volcanoes began to erupt again. Most volcanoes do not erupt in one big boom; rather, they smoke and smolder and spit little spurts of lava down the edges of their craters. So Tungurahua (about 150 km south of Quito) is spewing ash once again.  The community on the south side of the volcano has been dealing with ash from the sky since 1999 when it began this period of “erupting”.  If you visit the town of Baños, on the northern slope of the volcano, you can take pictures of the fire activity in the crater (although it wasn’t flaming on my last visit). 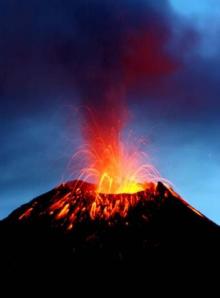 Tungurahua is not our only threat; Pichincha itself (one side of the mountain we climbed on Saturday) had similar eruptions as recently as 2004.  In 1999 the country was going through political and economic crisis (overthrown president, bankrupt banks) and many Quiteños believe the mountain was responding to it’s people; it erupted twice, leaving Quito covered in inches of ash, and keeping Quiteños indoors for days. In fact the Smithsonian Institution calls it “one of Ecuador’s most active volcanoes.”
But perhaps the greatest danger is the massive Cotopaxi, which you can see in our hiking pictures.  Cotopaxi is often visible from different areas of the city, and it is responsible for creating most of the valleys in the area.  In 1877, Cotopaxi’s lava flows reached all the way to the Pacific Ocean. If it were to erupt today, it could pose a huge danger, in part because its glacier would melt and flood the entire valley surrounding Quito.
So we live with the threat of being the next Pompeii, but I suppose there are only two things we can do: Keep our emergency kit ready, and hike!
So here are a few views from our hike:

Katherine lived on four different continents before settling in to Washington, D.C., to raise her family. She works at a global think tank during the day and raises twin boys the rest of the time. When she isn't working on a spreadsheet for work, she loves walking in the forest with her family, which invariably involves stomping in puddles and climbing on logs. Though she is less of a world traveler these days, she continues to seek out adventures, from exploring D.C.'s museums and playgrounds to taking road trips to national parks. When it's time to unwind, she can be found snuggling with her husband on the couch. Likes: adventures, sleeping past 7 a.m., being surrounded by forests, the sound of her boys laughing, and locally made ice cream. Dislikes: whining, the patriarchy, and people who judge parents/kids.
View all posts by Katherine →
This entry was posted in Ecuador, Nature, the environment & landscapes, Our Daily Life. Bookmark the permalink.